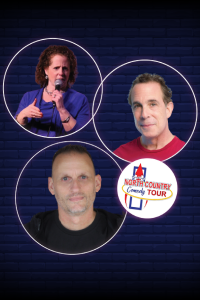 Join Adirondack Winery for a night full of laughs on February 18 at 7pm! We’re holding our first-ever comedy show in the event space at our Queensbury Tasting Room. Mikael Gregg’s North Country Stand-Up Comedy Show will be bringing in three amazing comedians to entertain you for a fun Saturday night out.

High-energy comedian Pat DieBiere will headline the evening. His highly relatable and yet uniquely hilarious point of view covers topics like; relationships, his Italian redneck upbringing, Amish gangsters, almost getting killed at Dunkin Donuts, and how much he hates apple picking. All this combined in a sometimes angry, sometimes devilish, always funny package leaves audiences roaring and wanting more. He has toured comedy clubs, casinos, theaters, and entertainment resorts since 2012 and has 2 albums to his credit.

Comedians Mikael Gregg and Lauran Turczak will open the evening with their own hilarious sets. Mikael has been performing stand-up all over the country since the ‘80s with comedy legends like Bill Hicks, Janeane Garofalo, Rodney Dangerfield, and Kevin James.

Lauren Turczak blends observational humor with her personal life and covers things that everyone can relate to. She is a triple threat - an actor, stand-up comedian and, if you don't come to see one of her shows, she'll make you listen to her sing. She has performed in comedy clubs and other venues from NYC to Tulsa, Oklahoma including several Funny Bones, Gotham Comedy Club, Comedy Works, The Looney Bin, and the Broadway Comedy Club.

Tickets are $35 and include one glass of wine (or beer/cider). Additional food and drink options will be available! This event makes the perfect Valentine’s Date Night!

Follow our socials to stay up to date on all things ADK!